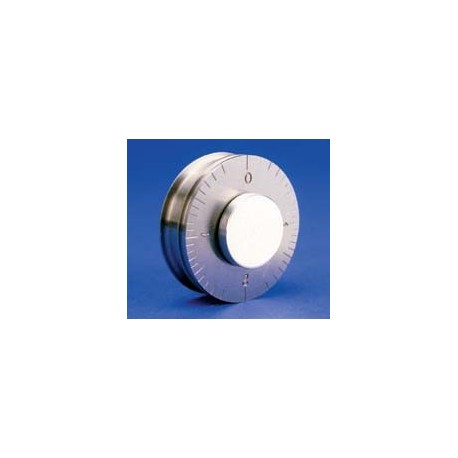 Precision, direct reading WET FILM THICKNESS GAUGE used for accurately measuring the wet film thickness of paints, inks, adhesives, gel coats and many other products. The 2" diameter wheel gauge features 3 rims along its perimeter. 2 rims are the same diameter, spaced apart for gauge support, and are concentric. The third rim is smaller, located on the outside of the supporting rims.

Two calibrated scales are engraved directly on the measuring rim (one in Mils the other Microns). To measure wet film thickness, the gauge is rolled over a freshly coated substrate at the highest range position. The outside rim will pick up the material only at and below the actual film thickness, which permits immediate and direct reading. The wheel is then lifted, placed on another part of the substrate with the wheel at the original position and rolled in the opposite direction. Examination of the measuring rim will show positions at which pick-up took place and each point will correspond to a position on the scale or the wet film thickness. 3 models available: 0-1 mils, 0-2 mils and 0-4 mils.

NOTE: All wet film gauges are produced and checked in such a manner to qualify under MIL STD 45662A for certification traceable to the National Institute of Standards and Technology.
This certificate (at an additional cost) meets the requirements of ISO 9002. The tolerance of a particular gauge will be so certified at gauge midpoint and near its lower and upper recommended use limits and a suitable certificate will be included with the shipment of the gauge.

This product is no longer in stock